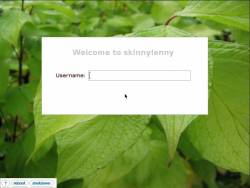 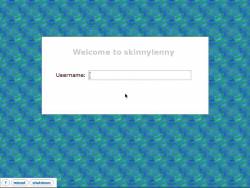 skinny-xdm-beautify takes the rather functional default XDM interface and makes it almost attractive. It does this by pointing configuration files mentioned in /etc/X11/xdm/xdm-config to beautiful versions also installed by this package.

Finally, skinny-xdm-beautify changes permissions on /sbin/shutdown so that regular users can call it – that is, so that a user can shutdown or reboot from within a session rather having to be a super user, just like in other personal computer operating systems.2)

To shutdown the computer from within a session, issue the command:

skinny-xdm-beautify gives you three choices for the root pixmap (i.e., background), as described below.

skinny-xdm-beautify ships with a small collection of photographic images that can be randomly selected from for the login screen's background. To enable this feature, you must install skinny-randyroot.

If you like the feature, then you may consider installing skinny-xdm-extras as well.

If you install xstarfish (in the regular Debian repositories), skinny-xdm-beautify will present you an automatically generated, colorful, and beautiful root pixmap each time XDM is displayed.

If you have neither skinny-randyroot nor xstarfish installed, skinny-xdm-beautify will make the XDM login screen's background a solid dark grey color. Not stunning, but less unbeautiful than the XDM default. The color is hard-coded into /etc/X11/xdm/xdm-config/skinny-Xsetup.

1) The Gentoo Wiki Archives were indispensable in making this go.
2) The permission changes are made whenever XDM is started. If you want to disable this feature, comment out the line chmod u+x /sbin/shutdown in /etc/X11/xdm/xdm-config/skinny-Xsetup and issue chmod u-x /sbin/shutdown as root. Don't forget to repeat this if you update/reinstall skinny-xdm-beautify.
skinny-xdm-beautify.txt · Last modified: 2009-06-25 23:29 by mithat